The snake who vomited dollars

In talking to school children recently about The Butterfly Heart and writing, one of the questions most commonly asked is ‘where do you get your ideas from?’ The simple answer to this is ‘life and death and everything in between.’ But while that may be true, it is a glib answer.

For me the ideas come from half remembered incidents,  waking dreams, snippets of stories read in newspapers,  an expression in someone’s eyes, an offshoot minor character in a story I have already written, an unusual saying or expression (as I heard the other day ‘he wouldn’t take you to the fair now,’),  a chance remark, a peculiar sight on the road,  stories I was told as a child, emotions, places I have lived in and people I have known.

There is enough fantasy and curiosity in everyday life to last us forever. Last week I read a story with the headline ‘Snake Vomits Dollars’ A dream of a headline. It was not only the story that was fascinating but the colourful language used in the story.

I quote – from Tabloid News Ghana.

All roads led to the commandos part of Accra Newtown, otherwise known as Lagostown around 5:30am yesterday when word spread around about a money-vomiting snake. Various tales were given about what happened, one of which had it that a quarrelsome grandmother in a compound house in this part of the suburb, close to the storey building housing some military personnel, had heard an unusual recitation akin to an incantation and caught the whiff of strong-scented incenses as well. She therefore went immediately into the room to find out what was happening. Upon entry her 18-year old granddaughter was chanting as two red candles gave out a yellowish glow. The spectacle was so esoteric and frightening, the scared granny screamed, but her granddaughter pleaded with her to take it easy and avoid creating a scene.

The old lady could not be bothered, especially on seeing in addition, the gruesome contents of a carton – an African python and some currency in American dollar and cedi denominations. Within the twinkle of an eye, a crowd from nearby Nima, Lagostown and even Maamobi, had assembled at the location. The enraged old woman quickly went for a pail of boiling water and poured the hot fluid on the esoteric python, which died instantly. According to the eyewitnesses at the scene, the young girl vanished without a trace when her secret was let out.

The girl whose account of the event could thus not be obtained, was said to have sought money-making juju and the juju-man was said to have prescribed for her what to do on a Wednesday, on reaching the house. Unfortunately for her, her scared grandmother who was reported to have said she could not keep mute over such a scary scene, spilled the beans and even went ahead to kill the mystery snake.

Who wouldn’t feel tempted to write a story after reading this article? 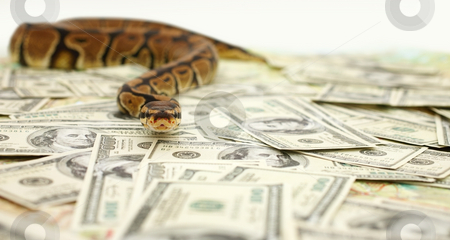