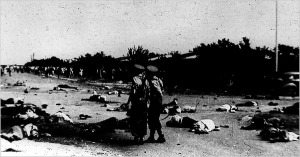 21st March is now a public holiday in South Africa in memory of the 69 people who were massacred on this day in 1960 by police who opened fire on protesters in Sharpeville. Most of the people killed were shot as they were running away. It was a brutal scene.

It happened 52 years ago but memories are long, as anyone who lives in Ireland knows only too well. There are many people alive today in South Africa who lived through Sharpeville and its aftermath, who lived through the darkest days of Apartheid and are now among those who have lived to tell of those times.

Today some people would rather forget. The system of Apartheid, they say, is dead and gone, over, kaput. It is no coincidence that the people who say this are those who manned the system, who worked it, who benefited from it and in increasing numbers voted for it until its eventual demise. It should not be forgotten because it’s effects run deep; they are with us today and will be for many generations. It was a system that reached deep into the lives of every South African and to forget it would be like pretending it never happened.

That is not how it should be. And in saying this I am not suggesting that as a country South Africa should live in the past and not move forward – it should and it is. But with memory.

Confucius has often been quoted as saying ‘Study the past if you would define the future.’ I do not know if that is an accurate translation of what he actually said, but it’s good enough for me!

And, just because I feel like posting this song somewhere, here is the song called Johannesburg by Gill Scott Heron who died last May. This seems as good a place as any to post it. This was him performing at a London Artists Against Apartheid concert in 1988 – but he wrote this song in 1974.