How’s this for a simple but brilliant idea? 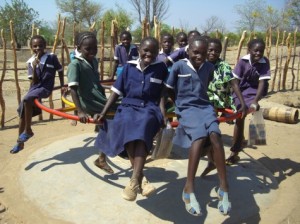 A Play Pump at Katapazi School in the Mukuni Chiefdom

I came across this on The Butterfly Tree website. An organisation that unusually does not apportion funds it receives to large overhead costs and salaries. All the money raised goes straight to benefit those who need it, and the project is involved in very practical work that is not imposed – they work with rather than for the communities they work in.

This Play Pump is located in the Katapazi Basic School which is in the Mukuni Chiefdom not far from Mosi oa Tunya , and enables the children, through play, to pump up clean safe water from the underground borehole into a 2,500 litre tank.

Here are the facts (republished from Just a Drop )

A child dies around every 20 seconds as a result of water-borne diseases.

Over 1.1 billion people in the world – roughly one eighth of its total population – do not have access to clean, safe water.

Around 2.5 billion people do not have access to adequate sanitation – almost two-fifths of the world’s population.

Over 2.75 million people die from diseases every year because of unsafe water.

Over 40 billion working hours are spent carrying water each year in Africa.

In parts of Africa women and Asia women often carry water weighing as much as 20kgs (the same as the average UK airport luggage allowance) on their heads.

This entry was posted in Uncategorized and tagged Play Pumps, The Butterfly Tree, Water, Zambia. Bookmark the permalink.