Bloomsday in Dublin, commemorating the genius of James Joyce.

Youth Day in South Africa commemorating the deaths of hundreds of school students at the hand of the South Africa Police in 1976.

I can never remember the day as anything else.

It is a day that has come to be symbolised by the photograph of Hector Pieterson, one of the first children shot and killed by the Apartheid government on that day. It was taken by Sam Nzima, a photographer at The World newspaper, as Hector was picked  up by Mbuyisa Makhubo, a fellow student, who ran with him towards the Phefeni Clinic, with Pieterson’s crying sister Antoinette running alongside.

Hastings Ndlovu, a fifteen year old student, was one of those shot that day. It is believed he was the first of the children to be shot – his name however remains unknown as there was no photographer at hand. Many more young people were killed, that day and in the days following and it would be true to say that this day changed the course of history in SA.

A Hector Pieterson museum has been established in Soweto and Antoinette, Hector’s sister, works there as a tour guide. 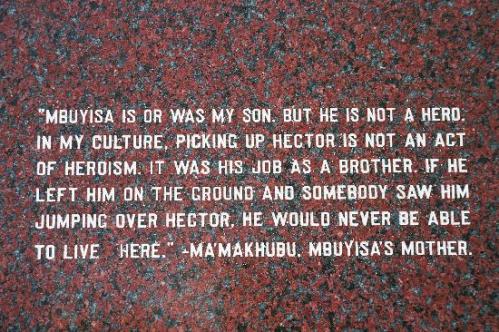 The words of the mother of Mbuyisa Makhubo, the fellow student who picked Hector up.

Hector Pieterson was in fact born Hector Pitso, and in some ways the change of name by his family says as much about Apartheid as does his death. They changed it to a name which could pass muster as a ‘coloured’ name – a term given to people in SA of varying heritages. People whose opportunities, while severely restricted, were slightly better than those people classified ‘black.’ Under Apartheid, where your racial category was everything, there were constantly people looking for reclassification.

A lot has been written about the notorious ‘Pencil Test’ – a test carried out by government officials on those who wished to be classified as ‘white’. The test went something like this: a pencil was inserted into the hair of the person wishing to be reclassified – if it fell to the floor, ‘white’ classification was granted, if it stayed in place, ‘coloured’ classification remained. There were further layers in the test – if someone, like the Pitso’s for example, wished to be reclassified as ‘coloured’ from ‘black’ the same pencil would be inserted and the person had to then shake their head. If the pencil stayed in, no reclassification!

A sick and dehumanising society.

Here below is an artistic rendition of it entiteld Ukuguqula lbatyi (the pencil test) by Kemang Wa Lehulere, an artist living in Johannesburg.