Only getting round to putting up a few pictures of this now. Was a lovely launch – great crowd and they all seemed merry! Lots of family there, plus members of my writing group Gemma Hussey and Jean Flitcroft, plus members of my young writers group from the Kilkenny Vocational School, a spectacular cake made by Nicky Read of Nicky’s Cakes and all taking place at the wonderful Stonehouse Books. A big thank you to Liz, Tara and Claire for all the work, and to Palmyra Restaurant for the delicious food. Best hummus I’ve tasted. Also great to see Dubray Books well represented at the launch with their children’s book club, and The Book Centre as well! As I have said many times we are blessed with our booksellers. Conor Hackett, the Walker Rep in Ireland was down from Dublin – thanks Conor for making the trip and for being part of such a wonderful publisher.

I was lucky to have Tom my partner there – author of Old Friends,  and all our children – Amy, Christie, Kate, Aisling and Maurice, as well as my parents and a great representation of the O’Neill clan. Christie, as you will see from the pics, did the reading – far better than I could have done. Greatly appreciated. And Gemma spoke as well before I mumbled my thanks! So, a big thank you to everyone who was there – and to the two visitors to Kilkenny who wandered in from the street wondering what the hubbub was about and then bought a copy of the book! An unusual memory of a visit to Ireland, the launch of a book set in Zambia. 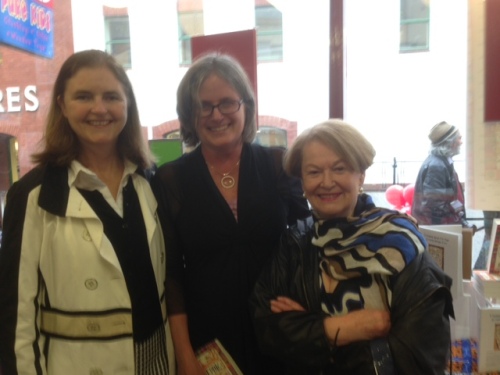 I belong to a small (but lovely!) writers group and we meet every couple of weeks. One of the things we try to do each meeting (aside from the business of presenting to one another our latest works of wonder) is a writing exercise. Some of them we do as part of the meeting, small bursts of creativity that get our writing brains in order, others we do before coming to the meeting and those we read out to one another.

One of the exercises introduced to us by one of our members, Jean Flitcroft , was the famous or infamous ‘Barn Exercise’ by John Gardner. It goes like this – ‘Describe a barn as seen by a man whose son has just been killed. Do not mention the son, the  war or death.

A difficult exercise and we all produced different results –  every one of them interesting. So we decided to try another of his exercises  and, on getting the full list, we opted for freedom of choice. I chose this one: Write, without irony, a character’s moving defence of himself (herself).

I thought I might reproduce it here – I enjoyed writing it (and I strayed from the intent somewhat) but for me the value of it was in the way it forced me into creating a character that up until that moment I had not known. And I liked her.

I used to be a light hearted woman, in the very proper sense of the words. It was not that I had no tribulations, it was that I scarcely noticed them for what they were. To others they may have appeared burdensome, even overwhelming, but to me they were just part of my life. Part of who I was and who I would become.

And I need to tell you about that one day because it was on that day that my world became something other. You could trace a straight, bold line from that day to right here, to me standing before you and telling this tale.

We were five in the family. First there was Jimmy, God rest his soul, a cross man but fair. Most of the time anyway. Then there was me, in order of appearance if you will, and Sarah’s my name. But you know that already. After me came the three boys, one after the other just like that, Conor, Cian and Calum. Calum came last and he was said to be a little soft but I never paid that too much attention. His father did, but then his father paid more attention to most things than I would. I won’t say too much more about that right now.

So there we were, the five of us. A family. Living as you do from day to day, month to month, years to year. Just like any other family. Through it all I did what I needed to do and most days I had a song in my heart. I think the three boys did too, they got that from me. Easy going, never a bother on them. It could have carried on like that forever, well, for as long as I lived, as I did not care for things to be any other way. Jimmy, you see, for all his faults, was a good worker. A good provider. We never wanted for much and we were not often cold or hungry.

I see you frowning, so I suppose I should explain. When I say all his faults I really mean one particular one. Because it was this fault that decided everything in the end.  When I was at school our English teacher used to talk about Shakespeare’s heroes who always had one, just one, fatal flaw. Jimmy did too. He thought more of himself than he really should have. That doesn’t sound like much I know, but it was. He thought he was cleverer than everyone and certainly cleverer than any of us. He didn’t like anything or anyone interfering with that thought. Most times that was alright; if he wanted to think that and it made him happy then, sure, I’d let him think that. After all he was easier to live with when he was happy.

Calum was the problem. Calum didn’t really understand about fatal flaws and things like that. How could he? He was a young lad and he had never found his lessons very easy. I hoped that Jimmy would understand that, after all he was the one who noticed Calum’s little problem. But he didn’t understand and one day, that day, it all went wrong.

You see, Calum laughed when Jimmy said something that you really could not describe as a very clever thing.  Out of respect for the dead I am not going to repeat it if you don’t mind? The point is that Calum laughed. At him. At his father. And he couldn’t stop. I am sure that has happened to you before, when the laughter gets a hold of you and won’t let you go. Well, maybe it hasn’t, but it happened to Calum.

At first Jimmy tried to pretend it wasn’t happening but when it carried on and on, only growing louder, I saw how cross he was getting. Crosser than any of us have ever seen him. He started walking across the room towards Calum and I could see what was going to happen. He had the same look on his face as he had the time he killed Ginny, the sheepdog, the exact same look. I couldn’t let him do it, that’s all, because Calum was my boy. My youngest. I couldn’t have it.

And so, well you know what happened but I’ll tell you anyway, I picked up the glass vase that I had been given on the day we got married, my favourite vase because if you set it on a windowsill in the sun it caught every one of the rays, I picked it up and I hit Jimmy over the head with it. Just in time mind you. It was a heavy vase but all I meant to do was to stop him, I didn’t mean the other thing to happen. The vase broke, which was a pity, but so did Jimmy, God rest his soul. That got rid of my light heart I can tell you. From one minute to the next it was gone. Not so much because I miss Jimmy, I don’t think I do, but because that wasn’t a very nice thing for my boys to see and I think it probably silenced the song in their hearts as well. I don’t like to think that I was the cause of that.