As a short follow on the the previous post I came across this article by Kiran Flynn in The Guardian .

What caught my attention this: A large colourful sign outside the Bashbari village in Sreepur, Bangladesh, declares it “Child Marriage Free”, and its Village Development Committee proudly states that “since March 2011, we have had no child marriages”

The committee in Bashbari village, took part in community education programmes organised by Plan International. “We have been spreading the message to our community” says 25-year-old Rani from the committee. “Everybody discussed and then took an oath not to give children in marriage before 18.”

Shahida, 14, from Bangladesh holds her birth certificate that saved her from early marriage

Very interesting radio broadcast by Angus Crawford on BBC 4 last week on his programme Crossing Continents. You can listen online, download the podcast and browse the archive.

It dealt with the issue of child marriage in Bangladesh.

In Bangladesh 20 percent of girls under the age of fifteen are forced into  marriage illegally. The legal minimum age is 18. Child brides are often forced to leave school, are rarely allowed to work and many become victims of domestic violence.

These young girls lose their freedom and childhood completely. And with their bodies too young for child bearing, pregnancy results in serous health risks for both mother and child.

One of the issues that Angus Crawford highlighted was the work being done by Plan in Bangladesh. I was in touch with people  who have been helping Plan to raise awareness on this issue internationally.  What follows will tell you a little about the work they are doing and the children affected by this.

Meet Oli – The 12 year old working to inspire others 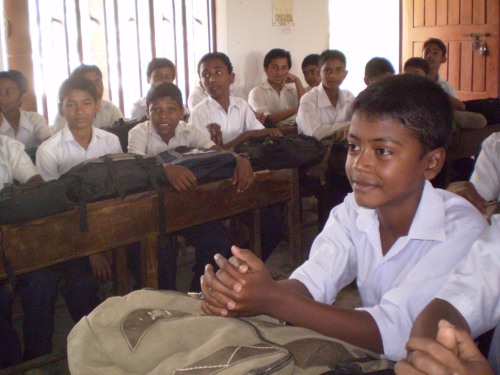 Oli is just 12 years old and a sponsored child with Plan International. He is an inspirational member of one of their children’s groups in northern Dhaka who work to raise awareness of the impact of early and forced marriage on children. Oli is helping to make a huge difference to poverty stricken families in Bangladesh.

“Behind our parents’ decisions to marry girls young is poverty – extreme poverty. If our parents get a good offer, sometimes it is very difficult to change their minds,” explains Oli

There are 25 children in Oli’s organisation and Plan has 60 similar clubs across the country.

Plan has reached around one million people with its anti-child marriage work while Oli himself has reached about 50,000.

Here is Oli, only twelve years old, speaking about the issue and what they are trying to do.

“On the day itself I was frightened: again and again I felt fear, fear, fear. I didn’t know what to do, or what was going to happen next. Once my grandmother and sister had gone, I had to go and live with my husband. I didn’t know him. That night I felt strange, and very scared.

“When I lived with my parents I had freedom. After I was married I lost this, and I can’t live the same way now. I feel very bad, because instead of going to school I live at my father-in-law’s house and do all the household work.

“When I was at home I could share my feelings and emotions. Now that I’m married I don’t have any say and I have to abide by what my husband and my father and mother-in-law decide.

“Two years after my marriage, when I was 14, I gave birth to a baby boy, but there were complications after the birth. He survived for 16 days but then he died.

“When I was getting married, I had five close friends. Two are still in school, but three are married. I never see them now. When I was in school and with my friends, I was very happy: I really want to go back to school.

“I don’t think girls should marry before they’re 18. If they do, they face problems like I did with my baby. I want to tell other girls that the age I got married was not good for health, for family, for education – for anything.”

How is Plan helping in Bangladesh? To help prevent forced child marriage Plan has been working hard to issue birth certificates to girls across Bangladesh. Having a birth certificate helps girls to prove they’re not old enough to marry.

Plan is also working with state organisations and authorities to raise public awareness of early marriage by holding open events, theatre shows and workshops. These events help to educate communities and explain why it is important that girls wait until they are over 18 to be married.